The Movement for Democratic Change (MDC) is the Zimbabwean political party focused on promoting democracy in a country where it has become very dangerous to associate with politics. Formed as an opposition party to the Zimbabwean African National Union – Patriotic Front (ZANU-PF), which is led by current President Robert Mugabe, the MDC brings together a number of civil society groups. The MDC is now labeled as a terrorist organization by Mugabe’s government, political activists are regularly beaten and arrested, and known members of the MDC disappear. The MDC front webpage tells of three recent deaths of people closely affiliated with the MDC. The site notes that this is becoming an all too common.

In a 2000 parlimentary election MDC candidates won overwhelming majorities, but there were calls of unfair elections and the issue remains caught up in Zimbabwe’s Supreme Court. The South African Development Community (SADC) and the South African Ministerial Observer team both maintain their positions that the election was free and fair. MDC members say there was harassment and force used by the ZANU-PF government at the polls. In 2004 the MDC split over the decision to take part in the 2005 parlimentary elections because of the “illegitimate outcome” of the last election. The MDC voted to take part in the elections (33-31), but Morgan Tsvangirai voted the decision down saying it was a waste of time. The MDC then split into Tsvangirai’s decision supporters and pro-senate members, led by the former MDC deputy. Some say that the split was ethnic based.

There are two main ethnic groups in Zimbabwe, the Shona (75%) and Ndebele (19%). Ndebele was an ethnic category that grew out of the military state created by the British in 1830. The ethnic term of Ndebele encompassed people of many different origins and in fact Shona people lived in this conquered area, but were placed under the Ndebele label. However, the ethnic identifications of and between these two groups were very low and there was no historical enmity between them. In 1896-7 these ethnic groups actually joined in the Ndebele-Shona Chimurenga resistance to the British. Guerilla forces grew and became political parties, but neither was purely ethnic based and recruited across the board. Needless to say the ‘ethnic conflict’ in Zimbabwe was the least serious of all African ethnic conflicts. The greatest conflict was between Black and White in Zimbabwe. There have been recent talks to reunite the split political parties.

This is the real historical problem that has led to Zimbabwe’s current problems. The problem in Zimbabwe can be summed up to a battle between Pan-Africanism and Neo-colonialism. Mugabe has called for White people to leave and so it makes the situation difficult when British Prime Minister, Tony Blair, has said that he is working closely with the MDC to create a regime change. Well there may be a high degree of internal pressure, the external powers cannot be dismissed. In order for the Western powers to achieve the goal of regime change they will use their secret services, CIA, network os military bases, and economic tactics. There is this other side of the argument that says maybe the MDC is not promoting democracy at all and is really a facade for Westerners to experiment in African politics yet again (Zaire’s Lumumba?). 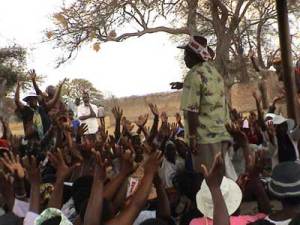 Back to democracy, regardless of conspiracies the basics for democarcy do not exist in Zimbabwe. Recently six MDC members were arrested under the “Law and Order Act” for holding illegal political meetings. The 2008 Presidential election is close and the MDC and ZANU-PF are in negotiations. Tsvangirai has said that the MDC wants to participate, but they want to ensure that it is a free and fair election. The MDC wants to participate to create democratic change and not to give legitimacy to a system favoring one side. The MDC is demanding that there be international control of the elections and that millions of Zimbabweans abroad be allowed to vote, a new voters’ roll and the appointment of an independent Zimbabwe Election Commission to supervise the polls. South African president, Thabo Mbeki has been chosen by the SADC to mediate the negotiations between the two political parties. There is worry that Mugabe will not comply with demands.