Day 11
Applied lots of Aloe today. The sunburn is getting better. The bus arrived as we sat down to eat. Kyle and I always seem to be two steps behind.

Breakfast was a large, thin, pancake thing with chicken sausage and some eggs, it was so good. At the seminar room today we got to bond with Ted (Prof. Tims). We talked about ourselves, majors, passions, and future plans. We then discussed the novel, The Beautyful Ones Are Not Yet Born. The book was mostly about corruption, the attainment of wealth, poverty, the quest to be western, and one man’s journey to live and work honestly. In the end of the book all he is left with is an “aching emptiness” and that is all the rest of his life could offer him. Kind of a downer, but it is interesting since the day before we met a woman working with some anti-corruption group doing a study on Ghana’s judicial system. 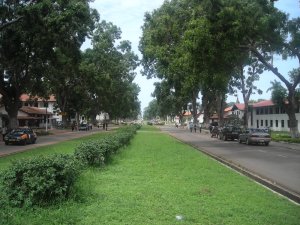 It was then lunchtime and breaktime. We wandered campus and explored some. We ventured all over the campus. We saw the 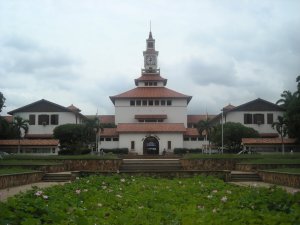 Library, the Center for African Studies, the dorms, and much more. The campus is much like any you would see anywhere in the world, obviously it has its differences, but nothing too out of the ordinary. The biggest difference, as on any college or university campus, was the dorms. These are huge structures of block squares where four people live. When school is in session you see the clotheslines of each student strung out with brightly colored clothing drying in the Ghanaian sun. 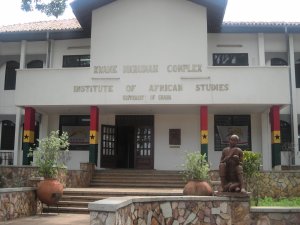 Surprisingly on campus you see many people walking around with ipod or MP3 headphones in their ears. Higher education in Ghana is still very much a place for those with the money. It is interesting to see, since we have come to know Ghana as a place that favors and loves human interaction, instead of the secluded american, music in ears, head to the ground, walk right past you attitude. This happens to be few students however, and most will greet you cheerily. The West cannot taint the Ghanaian tradition of greeting.

We settled down at an small cafe called ‘Tyme Out,’ got some cokes and played pool. This is where my mind recalled the idea of a hip hop planet. The walls of Tyme Out were adorned with posters of former great and popular rap artists and the music on the radio was their past hits. Even here this glorification and fascination of the gangsterism and commercialized hip hop culture exists. It is not surprising since West Africa is where hip hop was born. The radio often plays Ghanaian hits from the hip hop artists who brought the american style to Ghana. Why is the american style born from West Africa mirrored in the place of hip hop’s birth?

After lunch we learned more about Ted and his love and life of music. He was a music major turned music therapist. He has helped countless people recover from illness with music. He was trained as a concert pianist and this lecture brought us a drumming exercise. We first learned the history of drumming. The Europeans could not grasp the complex rhythms and beats of African drumming because it was like nothing they had heard before. Drumming was used to induce trances and was often used for social events. African drumming has many complex rhythms and patterns, but in the end they all come together to make one song. You cannot stop and listen to everything at once without being confused, you have to concentrate and focus from one beat to another. In this lecture we also discussed the aspects of health. The West decided to cut health to focus just on body. Where other cultures and societies looked at health as comprehensive in mind, body, and spirit. Music is a huge aspect of bringing together those aspects.

In the evening we went to a nearby Chinese restaurant. We ventured down our extremely busy road in Shiashie Accra to reach the restaurant. It was much bigger and fancier than we had thought. Sadly the food was also worse than we thought it would be. The menu was 20 pages long and didn’t really have much traditional Chinese foods. A let down at the least. I had the spring rolls, which just had cabbage and some random chunks of beef. A poor end to the evening, but tomorrow is another day.