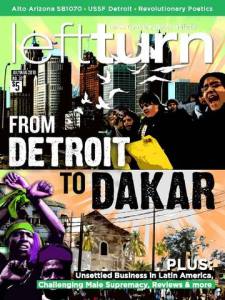 Thursday and Friday I attended many of the Africa focused workshops – most were very exciting and engaging. They really brought the African perspective into the ideas of the US Social Forum and made delegates think about the US role in issues affecting communities on the African continent.

African Unity Towards What? (Pan-Africanism & Nationalism is not enough!) by: University of Kmt

I still haven’t exactly figured out this group and what they do. They run the Kmt Press which publishes books and journals, but all of their sessions that I attended were focused on teaching with an African historical perspective. Their missions states that they are dedicated to educating the new generation of African leaders. Interesting that they are in Detroit and I wonder if they know of the Detroit Public School (DPS) Initiative starting in 1992 where Africa was integrated into school curriculums from math to literature.

This People’s Movement Assembly was geared towards bringing African perspectives into the US Social Forum and continue the discussion as preparations are made for the 2011 World Social Forum in Dakar, Senegal. The room was full of delegates from many African countries, Detroit, and US Africa Advocacy groups.

Briggs Bomba, Director of Campaigns at Africa Action, spoke strongly about building solidarity with those most affected in Africa. He said, “corporate led globalization has harshest effects on those in the perifery, the underdeveloped.” He reminded us that all of us the privilege to attend conferences like these and make the policies need to prioritize the communities most affected.

A delegate from South Africa spoke eloquently about the social apartheid of displacement – ideologically, locations, in decision-making and governments; in voting process lack of people power and transformational action, and in the social mainstream. “We cover many issues, but it is the same struggle. We come from different areas, but share common experiences.” (i.e. colonialism)

Some top issues that came out of the PMA:

An exciting and dynamic session that really makes me excited for the World Social Forum in Dakar!

This session was an interesting overview of AFRICOM by some leading scholars on the topic of US national security interests in Africa. The attendees were less diverse than the Detroit to Dakar session and most people came to learn more because it looked interesting and had studied Africa to some small degree in the past.

Most interesting was when the discussion turned to private military contractors (PMCs) in Africa responsible for fighting wars in Libera, Southern Sudan, and Somalia. A Ugandan delegate actually talked about being trained by PMCs in Iraq to then return and fight the Lord’s Resistance Army in Northern Uganda. Great to hear the perspective of the Ugandan delegate and Dan Volman as well as to see so many people interested in learning more about African issues!

Power-sharing Deals in Africa: Implications for Democracy – The Case of Zimbabwe & Kenya by: Africa Action

This was by far the most organized session that I attended at the US Social Forum. The Africa Action team did an amazing job of gathering great speakers, formatting the session, and bringing people into the room for the discussion. Many African voices were heard from delegates representing Zimbabwe and Kenya.

In both cases of power-sharing, the speakers agreed that the power-sharing deal was a sigh of relief that stopped the fighting and opened their doors to the international community and economy again. However, they also all recognized that power-sharing was a positive in the short-term, but can be positive as in the case of South Africa when Mandela and de Klerk signed a power sharing deal until the national democratic elections.

Here are some take-aways: