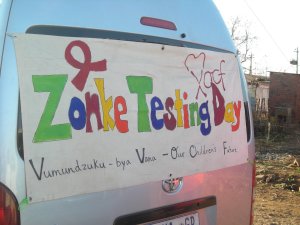 (photo: Zonke Testing Day banner on the back of a van used to transport people to the clinics)

While working in Zonke, a fact that shocked me was that an HIV-positive person can only access ARV treatment [for free, otherwise it is very expensive] if their CD4 count is below 200. This is official South African government policy and numerous studies have shown that accessing treatment earlier has greater long-term health benefits as ARVs are meant to be taken life-long. A World Health Organization (WHO) study in 2008 outlined four clinical stages of HIV progression. The WHO recommends that when a patient hits stage three with a CD4 count below 350, life-long ARV treatment should be started. Starting patients earlier negates complications later. However, in South Africa once the CD4 count goes above 200 again, treatment is stopped, which allows for greater complications and the need for new strains of ARVs. This year a push to increase the CD4 count threshold for treatment was rejected by the National Health Council on the grounds of affordability (85).

Prof Robin Wood, director of the Desmond Tutu HIV Centre at the University of Cape Town, is among the clinicians who have been calling for the South African government to raise the standard of treatment set out in its guidelines. However, he pointed out that better guidelines would be meaningless without improving the quality of care and access to services (86).

Professor Wood brings everything back to perspective. Anyone can call for greater access and more treatment, but if there is no distribution system for health services and care then what is the point. It would be like having a big supply of pizzas and no delivery drivers. This is the problem in many former “homelands,” townships, and informal settlements. There are inadequate or non-existent delivery systems for health services and treatment and so in areas where the HIV/AIDS crisis is most critical, there is no system to address the problem.

Today was the 2nd half of Prevention in the HIV/AIDS course. The kids are incredibly receptive with questions, comments, and the desire to learn more. We will be covering Treatment and resources this Friday. Celumusa did a great job of translating and really getting the course lessons through to the kids. Later in the evening she talked with us – her passion and drive to get people tested and aware and knowledgeable is amazing and so admirable with all she has been through. She is so excited about a Zonke testing day, the HIV/AIDS class, working with the staff and community to make more people talk and not be afraid to talk. Today she told the kids that she was HIV positive and they all did not believe her at all – they asked her to cross her heart that she was not lying. I could tell from the first class that the kids were learning much more than they had before beyond what HIV and AIDS stands for (87).

Much of the work at the center and the work that needs to happen in Zonke is HIV testing. Once tested you can learn how to take care of yourself, your children, and your community. When I asked Celumusa why people don’t test she said that people don’t know that they can live with HIV. So many people are involved in risky behaviors, she said, they have family members die from HIV/AIDS, but don’t test themselves. She also noted that pregnant mothers are tested and are given tablets, but not told their status. Testing is critical and we began working on this by planning a Zonke Testing Day for July 31st.

As I began organizing for the Testing Day, I came into contact with more of the health services available in Zonke. There are a number of traditional doctors and surgeries in Zonke. I can only imagine that this is because there is such a lack of other health services. Celumusa and others have bad perceptions of traditional medicine: evil, it kills people, and the traditional healers are crazy people. I was still having no luck finding any doctors, until I finally caught a traditional doctor in his office. He ran a clinic that was more Western than others and was supposedly trained by the government in traditional healing, but his office was empty every time I visited – no patients (88). Why are there no doctors?

Across the road from his office was a private clinic run by a group of Indian doctors. I also had a difficult time finding them, as did many Zonke residents. I was able to visit the private clinic only when Celumusa had to schedule an appointment for her baby. The private clinic had become her last option that she was sure to see a doctor. This says a lot for the health care system in Zonke (and other overcrowded settlements and townships left over from apartheid era) that the poor will pay to see a private doctor because the government health services are unreliable. Celumusa said they always give injections at the private clinic. Yet again I wonder about the quality of care. The clinics give painkiller tablets and the private clinics give injections (antibiotics?). If care is inadequate and access to ARV medication is beyond the ability of most, then the extended scenes of cemeteries become less shocking.

In the past 2 weeks, 3 people have passed because of HIV and AIDS that we have been directly informed of because the Buthelezi family has been close to the deceased – a father, an aunt, and a neighbor. Living in an HIV positive community is so different when you can fully understand the impact of just one life (89).

It was as if I had seen the walking dead. The prospect of death is so intertwined with life in Zonkizizwe that the author who wrote that South Africans attend more funerals than weddings was supported by my experiences this summer. The hardest hitting example was with the passing of the father of one of the families at the center. Three of the children attended the center. The oldest was 17 years old and was taking care of her frail father as he withered away, making sure her younger brother and sister were going to school, and attending school herself. This small family had already lost their mother to HIV/AIDS. The burden of disease was not met by the health care system or any the government response. The burden of disease rests completely on those who are affected and they do not have the resources to help themselves.

A critical aspect of combating the effects of HIV/AIDS in South Africa is education. As one of my goals over summer I developed an HIV/AIDS curriculum, based off of the Peace Corps Lifeskills curriculum, that the youth could share with the friends and families as peer educators. The spreading of knowledge is a powerful first step in giving people the resources they need to prevent HIV/AIDS. It is especially important when there exists no other means to access this information. The Zonkizizwe schools are under-funded and teachers are under-trained. This translates to the lack of a teacher for the Lifeskills curriculum and therefore the lack of knowledge on sexual health and HIV/AIDS. VVOCF is beginning to fulfill a service where the government is horribly failing.

All of our kids were tested, plus about 20 others. In all over 60 people tested. […] The community and guardian support was incredible. There were a few positives that we expected from already young mothers […] and unexpected bad news surprise […] Many good surprises came out of the day as we learned of many negative cases that were expected to confirm our worst nightmares (90).

The success of solutions driven by citizens was best evidenced by the culmination of the HIV/AIDS peer education courses, health classes, and the death of a father in an area wide testing day. I had taken the lead in organizing the testing day with the clinics, MSU study abroad volunteers, and various local organizations. Because of the stigma attached and sensitivity of the issue I was a bit nervous when the day came. July 31st 2008, the first Zonke Testing Day was a day of success fueled by the youth at the center. And while the numbers of people testing have made steady increases, the reality remains that the majority of those who need treatment after testing will not have access. Many in the generation just older than these youth mocked or scoffed at the testing day, but our kids were set on it.

We really are building a new generation of freedom fighters – not afraid of stigma, talking about sex, ready to be tested, and not about to turn a blind to HIV/AIDS. These young people stood today with a powerful support base of each other evidenced by yesterday’s action and the larger community is taking notice. The youth continue to give me hope and pride in being allowed to take part in such a community action (91).

The realities of Zonkizizwe paint a vivid picture of the effects of apartheid on health care for the majority of the South African population. The health system operating in Zonke is the ground zero of the failures of post-apartheid government policy to address the far-reaching impact of HIV/AIDS.