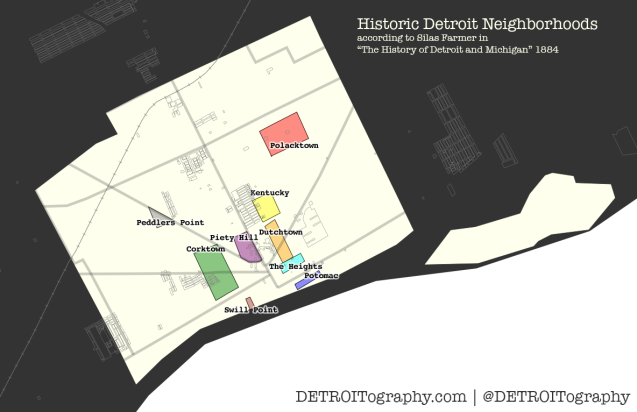 From “The History of Detroit and Michigan” by Detroit’s first cartographer, Silas Farmer.

Excepts on each neighborhood:

“This the larger portion of the territory on Fifth and Sixth Streets, for several blocks each side of Michigan Avenue, is called Corktown, because chiefly occupied by people from the Emerald Isle.

The eastern part of the city, for several blocks on each side of Gratiot Avenue beyond Brush Street, for similar reasons is often spoken of as Dutchtown, or the German quarter.

That part of the city lying a few blocks north of High Street and between Brush and Hastings, is known as Kentucky, from the number of colored people living there.

A walk a few blocks east and north of this locality terminates in the heart of Polacktown, where many Poles reside.