Denying that genocide is occurring in Western Sudan, canceling debt in Liberia, supporting Ethiopian military forces, and taking actions in Somalia, it seems that the US is shifting its policy in Africa towards a role acting as a military and development aide rather than a imperialist imposer.

The US Special Envoy to Sudan, Andrew Natsios, recently claimed that the crisis in Darfur no longer constitutes a genocide. He is claiming that the facts do not support the <a href=”http://www.africaaction.org/newsroom/release.php?op=read&documentid=2287&type=2&issues=1024
“>claim of genocide. However, from numerous accounts of people on the ground, the reality is much different. Is this the US’s way of re-framing the crisis and making it out to be not as prominent an issue? The fact that the US has no strategy for the Darfur crisis is perpetuated by this denial and absence of a US position on the growing crisis, as it spills into Chad and the Central African Republic. Africa Action has strongly criticized Natsios along with numerous activist organizations. “Activists across the country are outraged by Natsios’ denial of genocide in Darfur and by the continued absence of a U.S. strategy to address this worsening crisis. Threats of “Plan B” from the Bush Administration have left Khartoum unfazed. The death toll is mounting, and the U.S. must act now to stop the escalating violence by the Sudanese government and to provide protection to civilians and humanitarian operations in Darfur.” (Africa Action)

Last week, Condolezza Rice traveled to Liberia to announce the cancellation of Liberia’s debt. To help Liberia recover from conflict $391 million will be dropped. The President has also asked that Congress approve $200 million in additional aid. 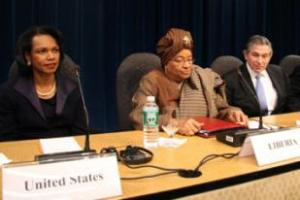 The current debt was called by Paul Wolfowitz, president of the World Bank, to be unacceptable. I see this as yet another step by the US to come up to par with China’s investments in Liberia and Africa. The US is attempting to build strongholds of US influence across the African continent in order to gain influence. Definitely the cancellation of debt for Liberia is key to development as they recover from conflict, but what might be the US motives behind the cancellation.

Now there are reports that <a href=”http://news.bbc.co.uk/2/hi/africa/6395033.stm
“>US warships are headed to the Somalia coast to engage rebels who have commandeered an aid ship bringing in food supplies. The cargo ship was a UN chartered vessel and was taken over by Somali pirates yesterday. They are unsure if the crew of 12 has been injured. The cargo ship, The Rozen, has delivered over 1,800 tons of food aid and was attacked last year by Somali pirates, but dodged the pirates. The current US military involvement in the Ethiopian and Somali conflict has raised some interesting issues. Is the US working towards pushing anti-terrorism measures in Africa? Is the US pushing for more military aid to developing countries or are they looking to just win over the leaders of countries for economic and political gain? 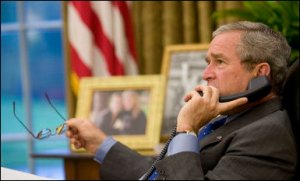 Another item to note is that, although Natsios has denied genocide, prominently displayed on the White House Africa Policy page is President Bush’s address to UN General Assembly, in which he strongly called the crisis in Darfur a genocide (the site has also received a revamp since the last time I visited):

“To the people of Darfur: You have suffered unspeakable violence, and my nation has called these atrocities what they are — genocide. For the last two years, America joined with the international community to provide emergency food aid and support for an African Union peacekeeping force. Yet your suffering continues. The world must step forward to provide additional humanitarian aid — and we must strengthen the African Union force that has done good work, but is not strong enough to protect you. The Security Council has approved a resolution that would transform the African Union force into a blue-helmeted force that is larger and more robust. To increase its strength and effectiveness, NATO nations should provide logistics and other support. The regime in Khartoum is stopping the deployment of this force. If the Sudanese government does not approve this peacekeeping force quickly, the United Nations must act. Your lives and the credibility of the United Nations is at stake. So today I’m announcing that I’m naming a Presidential Special Envoy — former USAID Administrator Andrew Natsios — to lead America’s efforts to resolve the outstanding disputes and help bring peace to your land.”