As a ship with a hole takes on water, so too does a state or government sink with a corrupt and ineffective government. Zimbabwe is sinking, many have noted this before, but presently its plunge to the depths seems to be even more imminent. President Mugabe of Zimbabwe is losing control of his country and is losing support from his allies. Zambian President Mwanawasa has called the Zimbabwean state to be like a <a href="http://news.bbc.co.uk/2/hi/africa/6475851.stm
“>titanic and the BBC notes that, “he said the country’s economic difficulties were forcing its citizens to leave like passengers jumping from the sinking ship to save their lives.” Zambia had previously been a proponent of quiet diplomacy. However, now even South Africa’s criticism is increasing, but has not voiced outright criticism of the Zimbabwean government. The United Kingdom has stated that the solution to the issue of Zimbabwe will be found within Africa. This statment may be gaining strength as the economic crises continue and the devaluation of the Zimbabwean currency continues and fuel costs soar. The final paragraph of this BBC article states, “More than 80% of Zimbabweans are living in poverty, with chronic unemployment and inflation running at more than 1,700% – the highest in the world.”

Yesterday President Mugabe attended <a href="http://news.bbc.co.uk/2/hi/africa/6499059.stm
“>’crunch talks’ in Tanzania as the southern African leaders seek to find a solution to Zimbabwe.

Many African leaders see Mugabe as a hero for standing against colonial rule, however I am not so sure that a defiance of colonial rule includes not serving your people and allowing them to suffer. As these talks occurred, the headquarters of the leading opposition to Zimbabwe’s government was raided by police. This has become a common theme. The Zimbabwean government has continually attacked any opposition, demonstration, or dissent. Mugabe arrived at the Tanzanian summit and as he did it appeared as though the police had begun a new crackdown on the opposition. 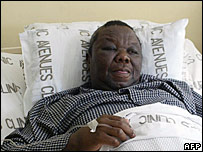 The Movement for Democratic Change’s leader, Morgan Tsvangirai, was among 20 people detained in a police raid yesterday. Some of those arrested were accused of fire-bombing, but Tsvangirai was not among them. The opposition is seen by the Zimbabwean administration as a Western puppet to overthrow Mugabe. The Information Minister told the BBC, “You [the West] are too much concerned with your Tsvangirai because he is your puppet and you make him an international hero.”

Mugabe, who has ruled Zimbabwe since 1980, now says that he favors elections next year. Mugabe had previously said that he would like to postpone elections until 2010 to extend his term, yet his own party, the Zanu-PF party, has stated that they were, “”anxious to get another candidate”. Gone in a year? Possibly, losing support of his own party, his people, and now his own resolve seems to be failing. When dissent is not allowed, opposition is forceable put down, and people are not permitted to voice concern with their government then how can you expect your boat to float?

However I am just a Westerner writing about what I have seen and what I have read. Don’t take it from me. Check out this blog entry from the This is Zimbabwe blog. The entry linked to is a clip from the South African news about the issue of Zimbabwe.