Firstly, this was not my idea, but I wanted to test it out in Detroit. Tim De Chant posted on Per Square Mile that inequality can be visualized from space via satellite images on Google Maps/Earth. He previously wrote about the concept that the lack of urban trees represented the absence of wealth in certain areas of a city.

This all made the gears turn in my head about how this research and De Chant’s image grabs from Google satellite imaging applied to Detroit. 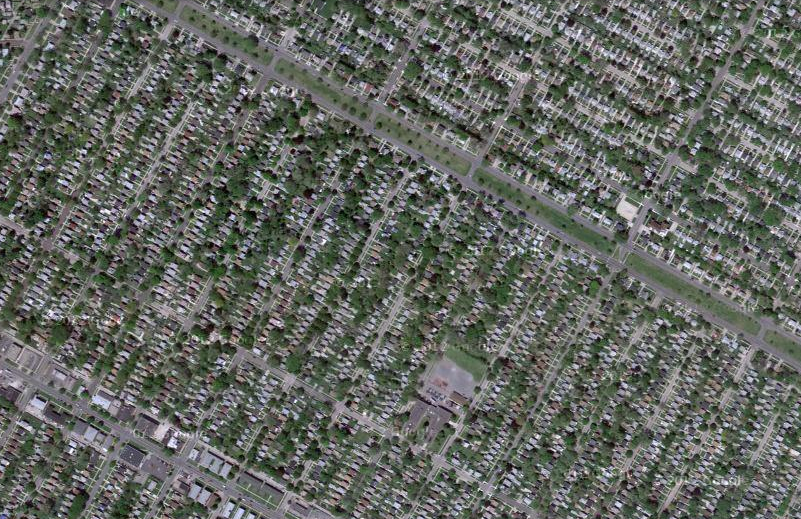 I choose 48205 because, “The neighborhood of 44,000 residents accounts for 6 percent of the city’s population, but was home to 15 percent of its murders and 13 percent of its shooting victims.” 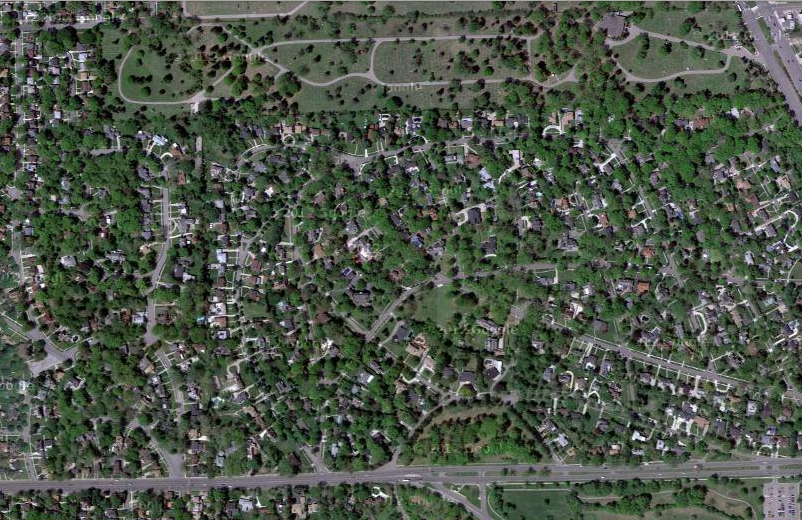 I used to live in this zipcode, in the University District. I would often run around the Palmer Woods neighborhood because I was fascinated by how different running south past 6 Mile Rd. and running north above 7 Mile Rd. could be such different environments. Census data pegs this zipcode as one of the highest income areas of the city.

The idea seems to work well in Detroit neighborhoods, however the Greening of Detroit is working hard to plant more trees every day in both wealthy and poor neighborhoods.

“Between 1950 and 1980, around 500,000 trees were lost in Detroit to Dutch elm disease, urban expansion and attrition. During that same time period, economic constraints prohibited the city of Detroit from replacing those trees. […] In 1989, Detroit, a typical American city, was losing an average of four trees for every one planted.”

The organization is estimated to have planted over 65,000 trees since its inception in 1989.

*Please note, the names and details of program participants have been changed to ensure anonymity.

After working with one of my first families, we’ll call the teen Larry, I began to feel limited by the research aspect of my current program. Since it is a research program testing various protocols for successful weight loss, my options and actions were often limited in what I could or could not do to help the family. At the time Larry was the heaviest teen in the program. I remember he was late for our first session at his house because he had missed the bus. I saw him walking down the street and knew immediately that he was who I was waiting for. Larry had knee and ankle problems as well as hypertension at age 15. At the time he was the heaviest teen in the whole program.

I built a strong rapport with the family and really enjoyed going to their house twice a week to work with them. Larry‘s weight fluctuated often, spiking and dropping dramatically from week-to-week. The family often attributed it to the medications that he was taking that cause him to retain water. However, over the first half of the 6 month program, Larry had lost about 20 lbs. from his starting weight. His Mom reported losing about 25 lbs. from participating and helping Larry during the program. She no longer needed to regularly wear oxygen and could walk more often than she was previously able.

In the last two months, Larry began to gain the weight back. Since his weight fluctuated so much it was hard to tell if he was really gaining a significant amount or if it was just related to the medications. By the final session of the 6 month program Larry had returned to his starting weight. His weight loss is considered significant and for him to gain it back is a red flag for larger problems. Research shows that when lost weight is gained back quickly it is much more difficult to lose again. His Mom was worried, he was confused, and I was unsure what to do. I gave the family additional information about other programs that Larry could participate in, but focused on affirming the skills that they had learned and the successes they had over the last 6 months.

It was during the following couple of weeks, which turned into months, that I really began dissecting Larry‘s dilemma. He was a very bright student, had some nice friends who helped him be active, and a very caring mother and grandmother. He took on more responsibility than most because his Mom wasn’t very mobile and yet he was unable to maintain his success in the program. I began to think back to other issues that the family dealt with during the program. The major one that jumped right out for me was their access to food. Larry and his Mom were getting food assistance and usually shopped once a month when the Grandmother could drive them to Meijer, which was located in another city. The family mostly ate frozen dinners that Larry could heat up in the microwave.

Beyond Larry and his family’s motivations, their social and economic situation became their largest barrier. Since they couldn’t afford to purchase healthier foods because they would go bad before the month ended, they were somewhat stuck to buy foods that were cheap and could be frozen. Their lack of money to be able to be more financially stable affected their food security in a similar way. Larry also reported eating a lot more at the beginning of the month. This is common among families using food assistance. One study found

“[…] a corresponding decrease of 10 to 15 percent in food consumption over the course of the month, suggesting some recipients may eat well for the first couple weeks after they’ve shopped and then run low on food near month’s end. This kind of ‘binge–starvation’ cycle has been linked to changes in metabolism, insulin resistance and, ultimately, increases in BMI.” (2004)

Larry‘s Mom would often report that he had eaten all of some food after they returned from the grocery store. Further research has identified connections between obesity and food stamps. The research found that the majority of food assistance receipts went shopping once a month, right after the food assistance amount is credited.

“Obesity cannot be totally pinned on food stamps,” says Jay Zagorsky, a research scientist at The Ohio State University’s Center for Human Resource Research and lead author of the study, “but it certainly is related to how the program is structured.”

In this situation, regardless of how committed the family was to weight loss and helping Larry manage his obesity, they were economically stuck in a cyclical nutrition pattern that would negatively affect his weight no matter his level of motivation. Socio-economic factors will win out over motivations every time, no matter the intentions. This is where human research is limited because the cause for failure is not pegged on the systematic inequality related to racial minorities and food assistance programs, but rather it is placed on Larry and his family for being unable to keep up with the program guidelines.

I keep reminding myself that this research will be applied to other programs in the future. Those programs will be able to replicate tactics that were most helpful and hopefully help even more adolescents in programs with more room to address multiple issues: medical, social, and economic.